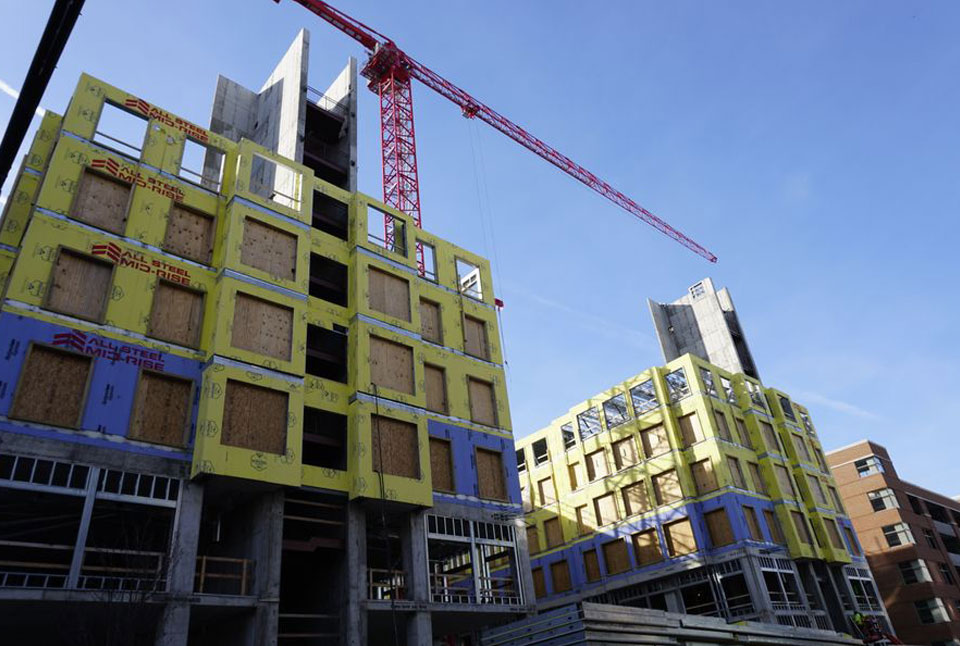 Project Details
Industry: Multi-Family
Space: 139,426 Sq Ft
Solution: Timberless-44
Height: 10 Stories
Recent population estimates have positioned Columbus, Ohio as the second largest city in the Midwest, positioning the rapidly growing city as the 14th largest in the country. The magnitude of growth within the Columbus market has spurred a demand for housing and retail space within the city’s downtown area to meet the demands of the population.

In response to this growth, South High Street has become a center for residential development within the city due to an ideal location and available space. Lifestyle Communities, a high-end residential and retail developer, seized the opportunity to aid in the rapid expansion of the area with the construction of the Beatty Building, a mixed-used 10 story building.

The Beatty Building will be the newest addition to the booming South High Street area with apartments geared towards the urban market, and amenities to appeal to fitness and leisure. Additionally, mixed-use shell space at street level and a garage, enrich the surrounding area by providing additional space for the booming area to expand into. However, despite robust plans for construction, structural concerns relating to adjacent historic buildings and labor shortages plagued the development with a series of delays.

In an effort to remedy labor and construction timeline issues, Lifestyle Communities searched for innovative construction methods to propel them past standard issues in development. Ultimately, LC chose to integrate cold-formed steel framing into the construction in order to reduce overall building weight, work within a limited area, compress time, and combat against labor shortages.

Cold-formed steel framing is ideal for use in mid-rise construction due to its ability to shorten project cycles while utilizing fewer resources. Quality, sustainability, and quality control are not sacrificed despite compressed schedule. All Steel Mid-Rise was able to provide LC with a quality, non-combustible product that allowed for flexibility in design despite limited construction area.

LC experienced All Steel’s ability to flexibly design when well after construction commenced on the panelized light gauge steel framing portion of the project, the owner and design team decided on a major change at the two upper levels of the building. The original stepped-back pop up roof sections were eliminated completely and the level below was redesigned to become the new roof level. Due to All Steel's system flexibility and engineering advantages, the change was able to be accommodated mid-stream despite production and installation being in progress.

The 139,426 cold-formed steel framed structure composed of the Timberless 44-system will be successfully complete on a compressed schedule of 5 months, allowing for other trades to begin work sooner. The project is scheduled to be open to residents beginning Fall 2019.
Project Details
Industry: Multi-Family
Space: 139,426 Sq Ft
Solution: Timberless-44
Height: 10 Stories 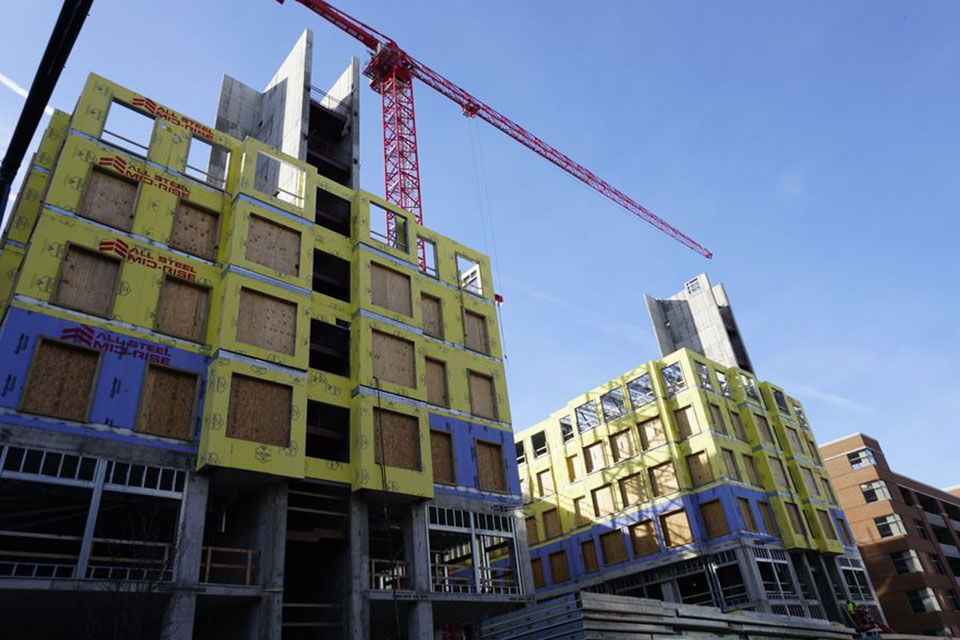 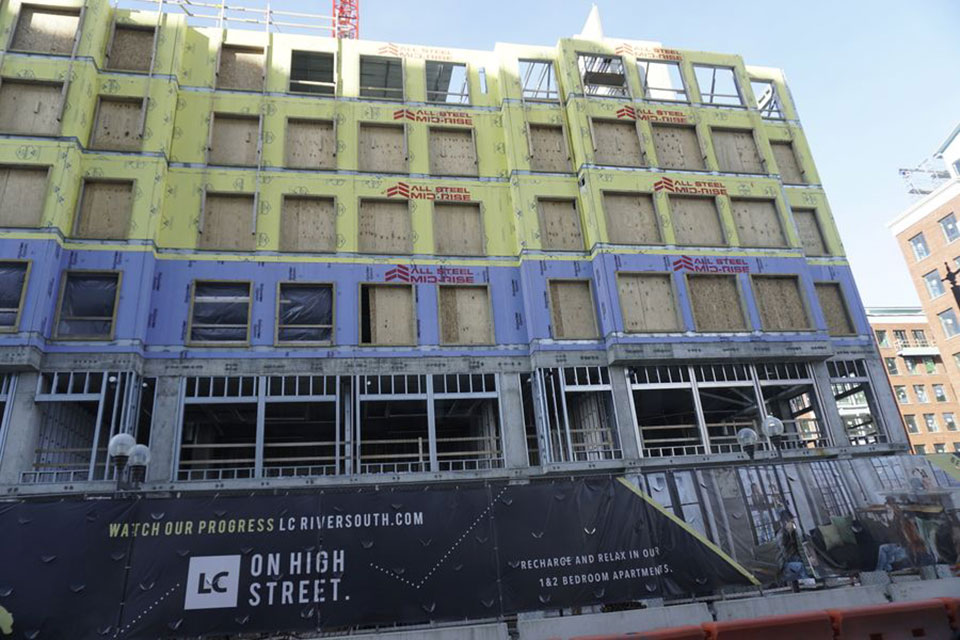 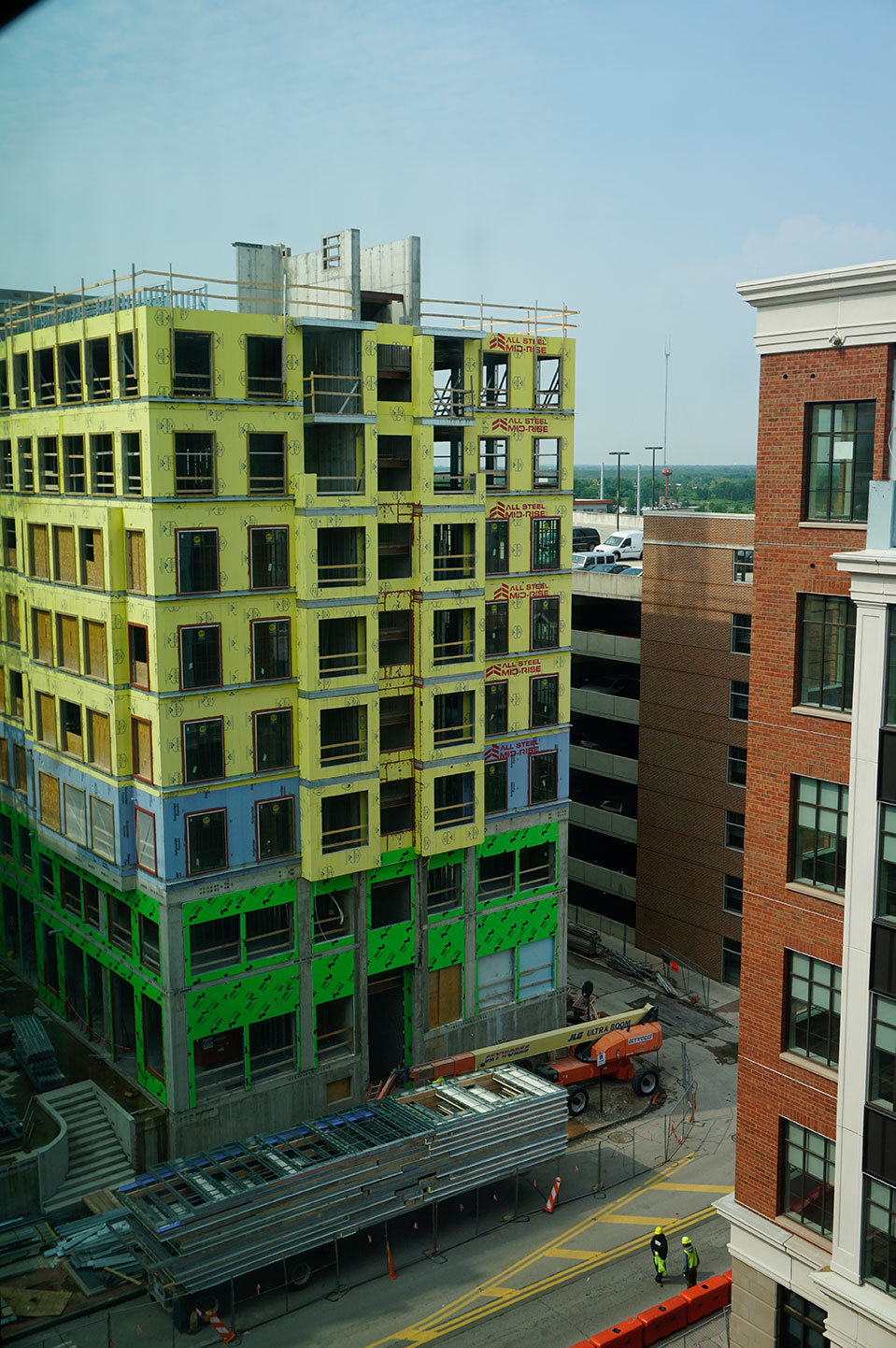 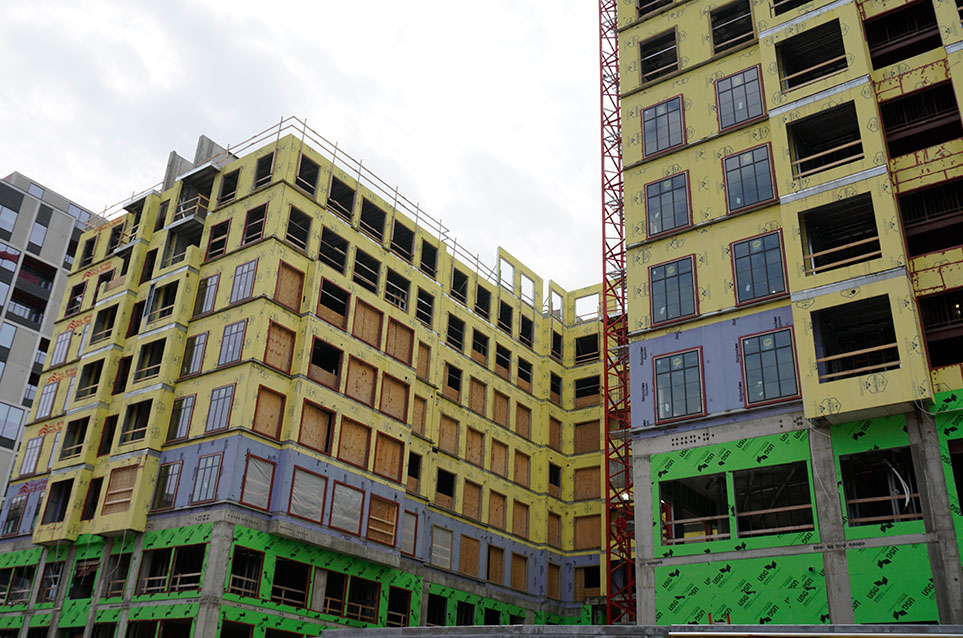 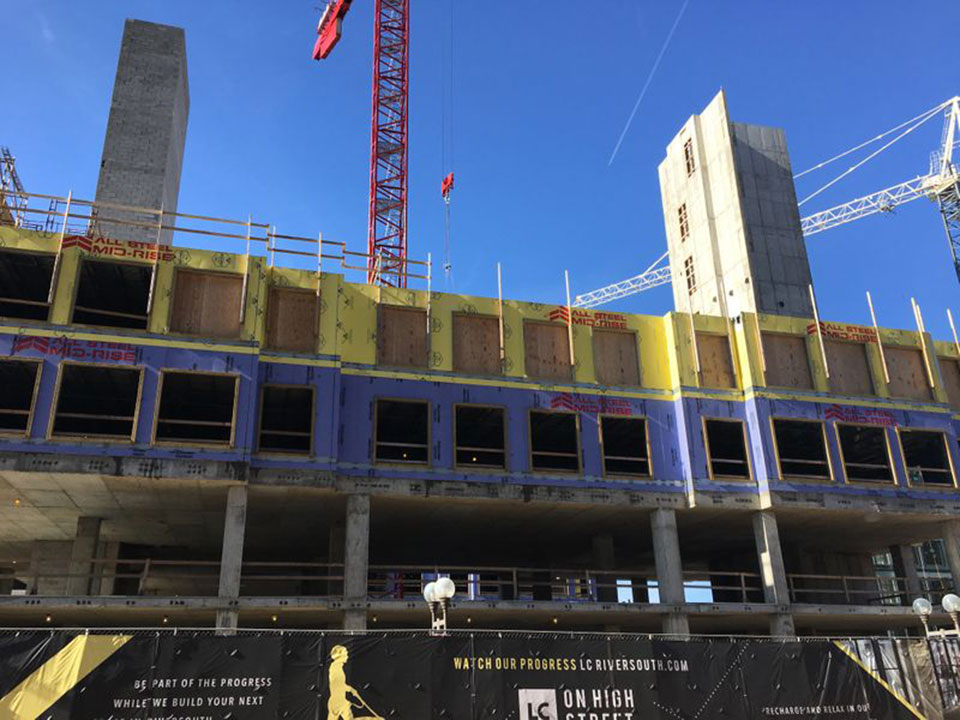 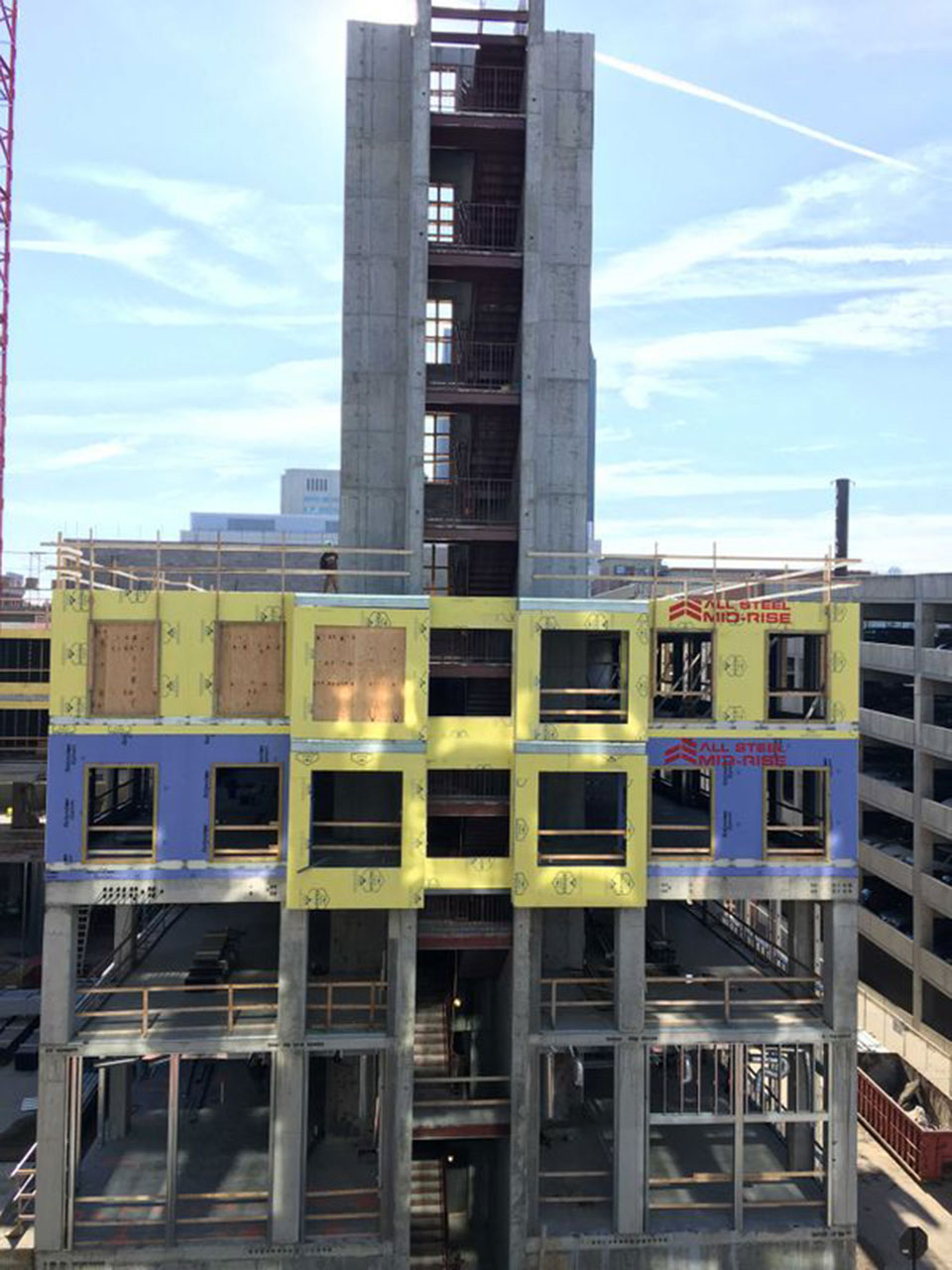